Using shallow aquifers: the oldest water source is a new method for climate mitigation and adaptation 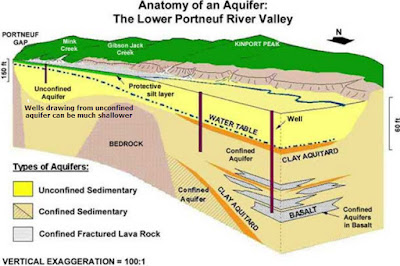 Deep wells draw from confined and protected aquifers for drinking water, while shallow wells pump water for short distances for non-potable use.

Water issues and climate change issues overlap tremendously. Transporting and purifying water needs energy, a lot of energy in some places. Here in California, around 20% of all electric energy consumption is used simply to move water around the state (although pumping over high points can sometimes recover some of the energy on descent).

Transporting water also results in water loss through evaporation and leakage. Once the water arrives, agencies use additional energy and produce emissions in the purification process, including use of ultraviolet energy and chemicals for water purification.

In addition to these effects that make climate change worse through energy consuption, our water system suffers from increasing vulnerability to climate change. With less snow, more heat waves, more heat in general that dries out soils, and more drought, we will have less water from typical sources in the face of increasing water demand.

For these reasons, using water from shallow aquifers is something new - or possibly something old and now is new again - that can help in the mitigation and adaptation for climate change.

Communities draw water from two sources - surface water such as rivers and lakes, and groundwater in aquifers. Historically, people dug wells by hand and went no deeper than the shallowest source of dependable water. In many areas, especially near coastlines, that would be a shallow aquifer separated from deeper groundwater by clay layers deposited over millenia (see figure above). Today we can drill deeply to get to confined aquifers further down that are protected from surface contamination.

In Santa Clara County, home of Silicon Valley along the San Francisco Bay, the majority of the two million people living there reside above shallow aquifers. The county water agency draws from and actively recharges the deep, confined aquifer, but they do not use the shallow aquifer. With insufficient local rainfall, the county water agency draws on water pumped from the Sacramento River to refill reservoirs and recharge the deep aquifer. That water then gets pumped out, much of it used just once on people's yards, then enters the shallow aquifer where it gradually percolates to the Bay.

That county water agency, the Santa Clara Valley Water District, uses surface water, deep confined aquifer groundwater, and pumped-in Sacramento River water to recharge both sources. This process uses a lot of energy and becomes less available with climate change, but the people of Silicon Valley don't take advantage of the water just under their feet, water they just put there when they watered their plants. 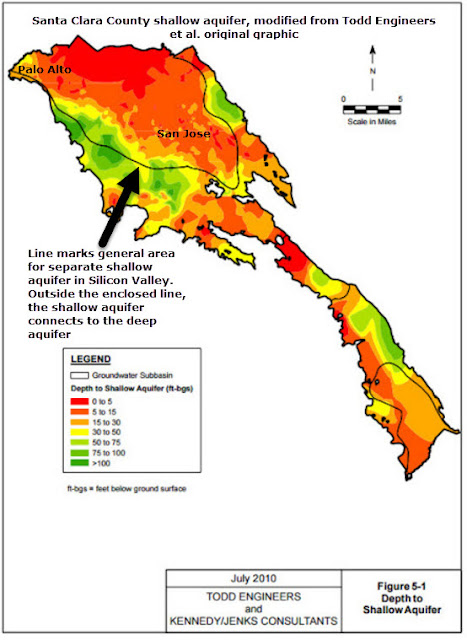 Source information available from Santa Clara Valley Water District in the paper "Revised Final Groundwater Vulnerability Study 2010"
The figure above shows the shallow aquifer beginning just a few feet down. The deep aquifer for drinking water starts 100 to 300 feet lower. The rain then that arrives in the north-central through the south central part of the valley floor reaches only the shallow aquifer, where no one makes use of it. Similarly the discharged water for plants and gardens also is stopped at the shallow aquifer and not reused.

The problem in using this readily available water is that it is not reliably drinkable - its close connection to the surface means it can get contaminated. Today, however, there are many uses for non-potable water, including on plants and gardens, and even indoor use like toilets. The energy needed to pump a few feet is a fraction of that needed for the deep aquifer and for water from miles away in the Sacramento River. No energy is wasted treating water that people do not drink.

And once used outdoors, any excess water filters right back to the same aquifer it came from, a natural recycling system. This local water source also encourages landowners to remove impermeable surfaces to maximize infiltration. Because the excess water remains nearby after use; because the source is at hand and doesn't evaporate or leak during transportation; and because it is a new water source that is little-used in developed countries, the use of shallow aquifer helps in both mitigation and adaptation to climate change.

Santa Clara Valley Water District can help in the use and recycling of water in shallow aquifers, for example showing how to retain water onsite to filter into the aquifer for use. Other places can and have taken action. In Australia and other parts of the US, water storage and recharge in aquifers for nonpotable use is happening.

Shallow wells and shallow aquifers were the first subsurface water sources for humanity, and they can once again help, this time in facing the modern challenge of climate change.